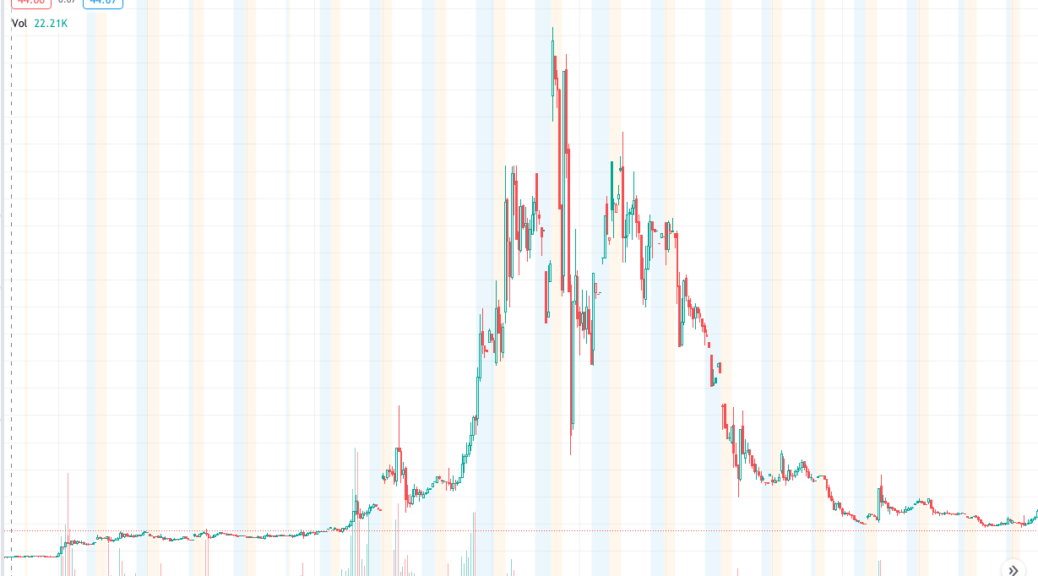 Global equity markets have been volatile but generally increasing in value since the lows of March 2020. While believing the opportunity to increase risk at these lows was good we have become concerned in recent months that valuations have become too high. This is most significant in the valuations seen in technology and more generally in US stocks. The availability of liquidity and low interest rates have been obvious drivers for this phenomenon but so too has rising retail investor speculation. For this month’s Focus we take a look at this speculation and specifically at the very unusual events that occurred around GameStop stock in the last week of January.

GameStop, an ailing bricks-and-mortar US retailer of video games and consoles, is interesting as it was the clearest example of social media led, speculative activity in recent months. The stock, unloved and loss making, had drifted down from around $50 in 2015 to under $5 in October 2020. It increased to about $20 at the start of 2021 and in the last week of January it rose 323 percent meaning that for the month it was up around 1,700 per cent. This was a speculative bubble. That is, the price departed wildly from the fundamentals. Some investors who got in early and got out early made a lot of money. Just as many people, who got in too late or stayed in too long, lost a lot of money, as valuations came back to earth.

The GameStop episode became newsworthy, as it tested a common interpretation of the financial markets. It was reported as a David versus Goliath situation where on one side the little guys (mostly amateur traders, mostly young, stuck at home), were able, by coordinating with each other on message boards, such as Reddit’s forum “WallStreetBets”,  to conspire to create the speculative bubble. On the other side, hedge funds or big Wall Street or City traders would fail in their quiet conspiracy to unfairly bet against vulnerable corporations to drive down prices – known as “going short”.

The question posed was whether financial markets competitively and efficiently allocate capital via the medium of the stock price or if instead they are rigged in order to make unseemly profits at the expense of the little guy. Remarkably, the little guys dominated for a while. Perhaps, at the beginning, they evaluated GameStop as genuinely worth a bit more than the price it was trading at. But then they kept going. They succeeded in creating a speculative bubble even with the hedge funds pulling in the other direction. More often than not, it is the latter that prevail. In this case, the hedge funds appear to have swallowed their losses and to have refrained from taking further short positions.

There is no need to feel sorry for the hedge funds. Their business is risk. They are aware of the wisdom in the dictum, often attributed to Keynes, “The market can stay irrational longer than you can stay solvent.” Even after taking their losses, these institutional investors remain wealthy. But the hedge funds in this case are not bad guys. They were doing what they were supposed to do: pushing the price of GameStop toward a level more consistent with economic fundamentals and thereby sending a useful signal for the allocation of capital.

There will be some traders for whom one should feel sorry. Those are the ones who jumped on the GameStop bandwagon, buying after the price had already begun rising, and determinedly stayed in even as the price went down. As a consequence of playing the Reddit game, they probably lost most of the money that they invested – losses that some of them will be ill able to afford. Gamestop now trades at about $45 having peaked at $450. According to some reports the hedge funds ‘closed’ their short positions at $118 so all the purchases above that price were retail investors buying stock which, according to even the most optimistic analyst is not worth $25.

Unsurprisingly the regulator is investigating what has happened here. There is no doubt that a ‘conspiracy’ to manipulate market prices had occurred. The result is likely to be more regulation and further restrictions on commission free trading, especially leveraged positions. To us this is indicative of a high and rising level of speculation that highlights our current preference for caution. If retail investors, taking no regard for the fundamentals of a stock, are able to generate sufficient demand to manipulate prices, even in the short term, there is probably an excess of liquidity. Further analysis of small sized derivative trading shows that this speculation is not limited to single stocks but is now at levels not seen since the Dot-com boom of 2000. The bias of purchasing calls over puts (betting on market increases over market decreases) is also the highest since 2000. With speculation this high, we prefer to take a step back which is why we rebalanced recently to lower the portfolios’ overall US exposure. Our overall risk level remains at 2 (out of 7) but we have increased overall non-US equity exposure where valuations are, on a relative basis, more attractive.